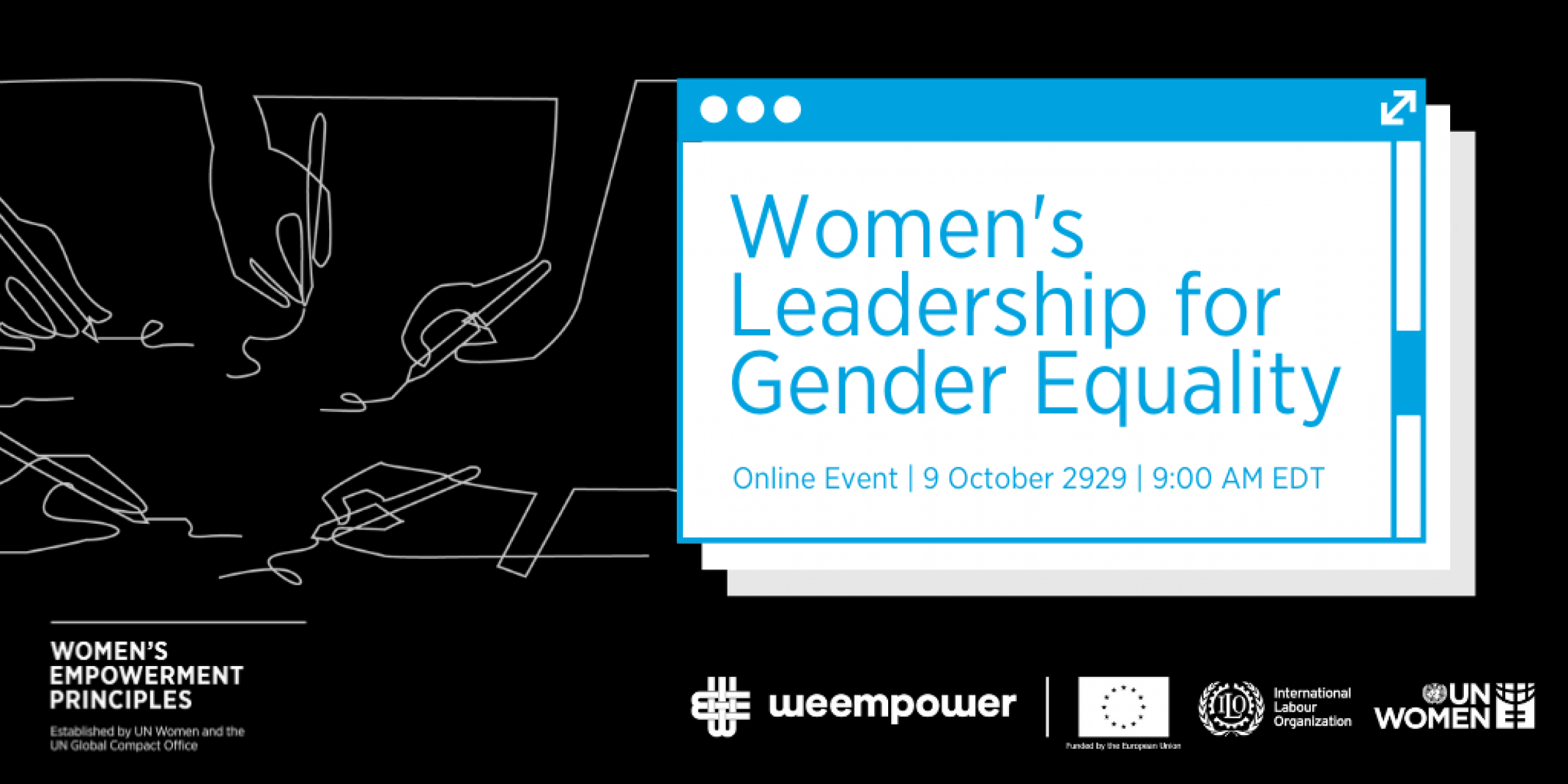 On 9 October 2020, the WE EMPOWER - G7 Programme organized the "Women's Leadership for Gender Equality" event to highlight the importance of women’s leadership and decision-making in society and the positive impact of gender parity on boards.

At the United Nations Fourth World Conference on Women in Beijing, China, in 1995, the global community stressed the importance of women assuming positions of power and influence, not only because their points of view and talents are needed, but also as a matter of their human rights. Moreover, increased involvement of women in decision making processes with respect to social values, development directions and allocation of resources enables women as well as men to influence societal agendas and to help set priorities. Efforts to achieve gender equality are thus more likely to be brought into the mainstream of decision-making and to be pursued from the centre rather than the margins.

A diversified board eliminates homogenous ways of thinking that often leads to groupthink, and research finds that having a critical mass of at least three women on corporate boards enhances firm innovation. Increasing women’s high-level leadership helps build better brand loyalty and sends a strong signal that the company is progressive, recognizes merit, and provides women’s career opportunities. To promote an increased number of women on boards, companies can eliminate gender stereotypes in the workplace and adopt a policy to promote women on boards featuring key targets and strategies for monitoring and reporting.

Companies can diversify board recruitment channels and practices, institute age and term limits for current board members, and regularly review board performance and diversity. Also, businesses can ensure that policies are implemented to address both demand side obstacles that hinder the selection of women on boards, and supply side obstacles affecting the pipeline progression of board-ready women.

The event will highlight the importance of women’s leadership and decision-making in society and the positive impact of gender parity on boards send a strong signal that a company is progressive, recognizes merit, and provides equal opportunities for women’s career advance.

REGISTER AND JOIN THE EVENT

After registering, you will receive a confirmation email containing information about joining the event. 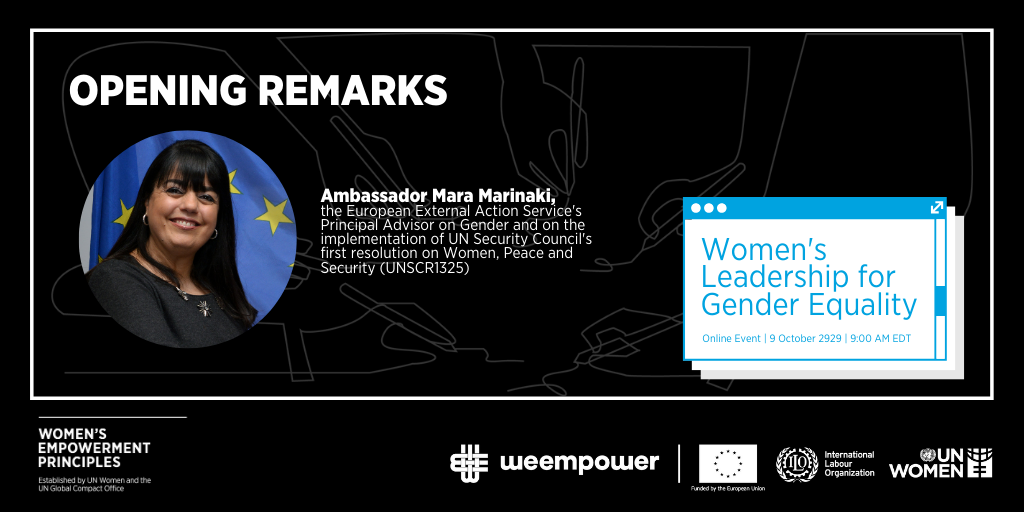 Ambassador Mara Marinaki is the EEAS Principal Adviser on Gender and on the Implementation of UNSCR 1325 on Women, Peace and Security.

Prior to this she was the Managing Director for Global and Multilateral Issues at the European External Action Service, responsible for EU foreign policy in the areas of international organizations, human rights, and security and non-proliferation of mass destruction weapons – a position to which she was appointed in May 2011.

Mara Marinaki joined the Greek Ministry of Foreign Affairs in 1980, and has served abroad in postings in Washington DC, Berlin, Vienna and Brussels. Ambassador Marinaki was the Permanent Representative of Greece to the OSCE 2007 - 2011.

Ambassador Mara Marinaki is a law graduate from the University of Athens, and holds an LL.M in International Law from the Aristotelian University of Thessaloniki.

Ms. Bhatia has had a distinguished career at The World Bank Group, serving in various senior leadership and management positions, both at Headquarters and in the field. She brings extensive experience in the area of strategic partnerships, resource mobilization and management. Ms. Bhatia has served for several years as Director of Global Partnerships for the International Finance Corporation (IFC), the private sector arm of The World Bank Group. She developed and expanded innovative partnerships with public and private sector partners to support IFC strategy in key areas, including fragile and conflict-affected states, gender equality, financial inclusion, support to women-owned businesses and other priorities critical for the achievement of the Sustainable Development Goals (SDGs). In addition, she has served as Director of Development Partner Relations for the World Bank in which she led efforts to ensure strategic alignment between institutional priorities and resource mobilization across the World Bank Group.

In various positions she focused on enhancing sustainability, institutional effectiveness and impact through strategic partnerships. As Head of IFC’s Latin America Advisory Operations, based in Lima and La Paz, she successfully grew the Corporation’s reach and impact in the region. As Director of Partnerships and Advisory Operations, she oversaw financial management, risk management, portfolio management, knowledge management and learning for Advisory Services across the globe. She has led diverse teams, including as Global Head of Knowledge Management, Head of Business Process Improvement and Head of Change Management. In addition to Latin America, she has worked in Africa, Europe, Central Asia and South and East Asia. Ms. Bhatia holds a BA in History from Calcutta University, an MA in Political Science from Yale University and a Juris Doctor in Law from Georgetown University.

Recognized leader for women in the United States and throughout the world, is Chair of the GlobeWomen Research and Education Institute, President of the Global Summit of Women, an annual international gathering of women leaders from around the world on business/economic issues, and Chair of Corporate Women Directors International (CWDI), which promotes the increased participation of women on corporate boards globally. Based in Washington, D.C., Ms. Natividad is the force behind the 30-year old Global Summit of Women, informally called “The Davos for Women” by past participants for the caliber of its attendees and presenters, as well as its mix of business and government leaders. As CWDI Chair, she has produced 29 reports in 22 years on women directors in different countries, regions, and industries and has convened women board directors and executives to “ring the opening bell” at 21 Stock Exchanges based in different countries to date — a business tradition in which she feels women must be seen.

Ms. Natividad’s commitment to promoting women, nationally and internationally, stems from her decade-long involvement with the National Women’s Political Caucus, a 50-year-old bipartisan organization dedicated to electing and appointing more women to public office. Widely recognized for her outstanding leadership of the Caucus, she was elected President in 1985 and re-elected in 1987, the first Asian American ever to head a national political organization.

Working with Mastercard’s Executive Vice Chair, Sam is supporting their work with governments, NGOs, foundations and fintech partners, using their technology, know-how and global network to drive inclusive growth and deliver innovation that serves the communities in which they operate around the world.

Sam is also a member of the 30% Club UK Steering Committee, supporting their efforts to drive inclusion beyond gender and its expansion internationally.

Prior to his current role, as Director for Public Sector UK and Ireland, Sam was responsible for working with Mastercard teams and partners to deliver innovation in smart cities, procurement, transit, financial inclusion and welfare disbursements.  Before joining Mastercard Sam held a number of management roles at system integrators, consulting firms and start-ups.

This Action Card gives a snapshot at the recommendations for achieving gender parity on boards.

Improving the Gender Balance on Boards and the Leadership

Read this case study on RELX, global provider on information-based analytics and decision tools for professional and business customers, to learn about why investing in collecting reliable and measurable data helps to illuminate the reality of gender inequality in the company.

Promoting Economic Empowerment of Women at Work through Responsible Business Conduct in G7 Countries (WE EMPOWER - G7 Programme) is a programme funded by the European Union (EU) and implemented by UN Women and the International Labour Organization (ILO). The WE EMPOWER G7 Programme convene multistakeholder dialogues in the EU, Canada, Japan and the US to exchange knowledge, experiences, good practices and lessons learned in the context of the changing world of work.