The Women’s Empowerment Principles Secretariat would like to warmly thank all companies and organizations that applied for the 2020 G7-EU WEPs Award and for your continued engagement in the Women’s Empowerment Principles. With your support, we hope to deepen and broaden our collaboration with the private sector and foster increased sharing of results on gender equality in the workplace, marketplace and community. We look forward to future collaboration and partnerships to advance our common objectives of gender equality and women’s empowerment under the 2030 Agenda on Sustainable Development and the Sustainable Development Goals.

The award ceremony took place online on 10 December 2020, Human Rights Day, during the WE EMPOWER-G7 Forum. It showcased companies with responsible business conduct and good practices to further gender equality and women's empowerment in the workplace, marketplace and community. 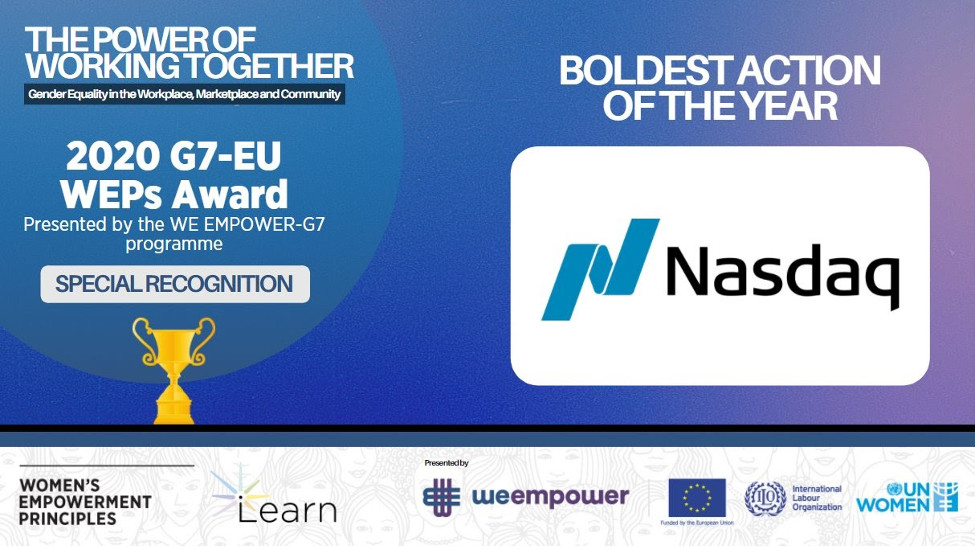 A special recognition went to Nasdaq for its new proposed listing requirements on board diversity and greater transparency. This bold action has an immense potential to advance gender equality and women’s empowerment in the workplace, marketplace and community with concrete, tangible and transformative results. Nasdaq publicly announced its proposal on 1 December 2020. 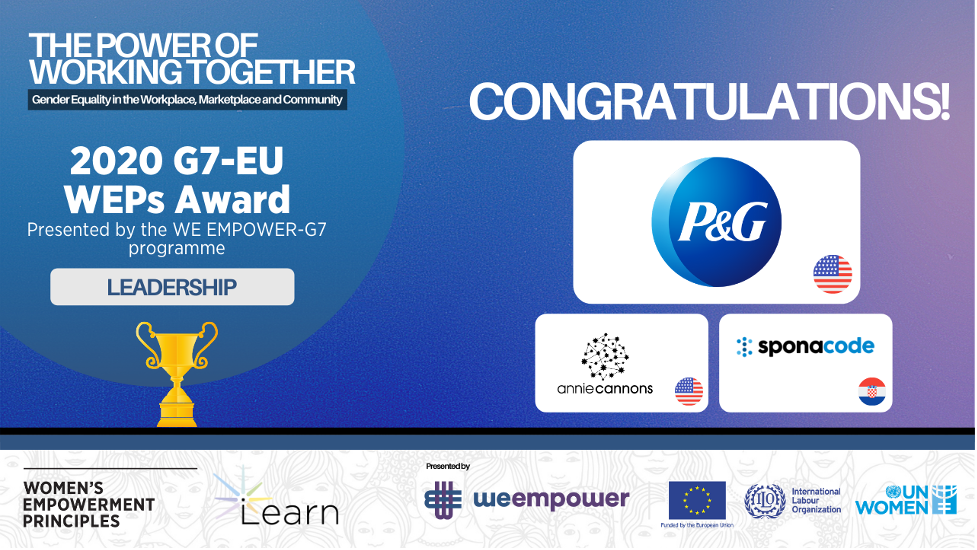 P&G was awarded for its tangible and large-scale commitments to gender equality. They invest more than a billion US dollars each year with women-owned businesses globally, their marketing and advertisement are gender-sensitive, and they are launching a comprehensive, fully paid, global parental leave, because “equality at work begins with equality at home”. So, in brief, Procter & Gamble addressed women’s empowerment in the workplace, marketplace, and the community, the three cornerstones of the WEPs and by doing so contributing to positively transforming the lives of many women and men across the world. 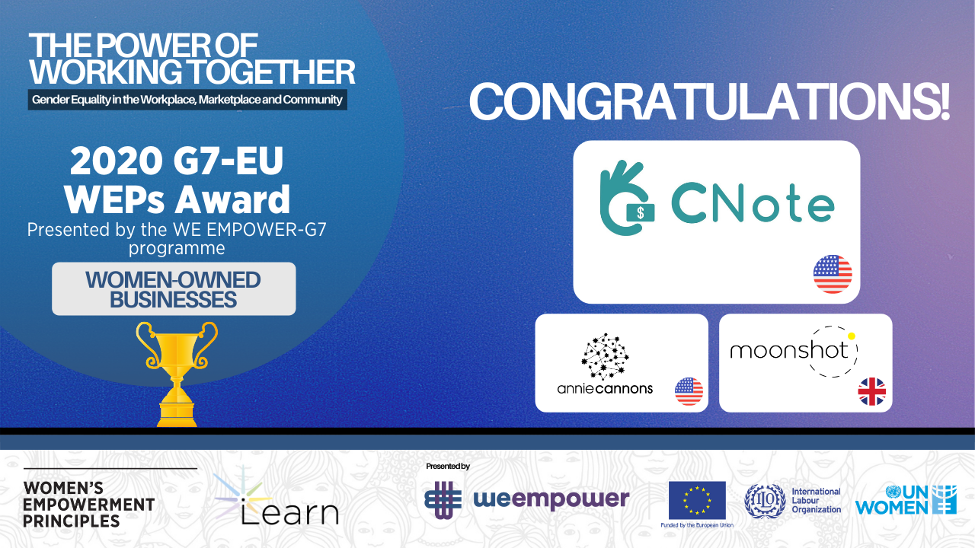 CNote was awarded for their efforts to address the persistent lack of funding for small businesses owned by women of colour. They also provide free business coaching and gather data to improve the small business lending process for women. COVID-19 has disrupted global supply chains, with women-led SMEs (WSMEs) being the hardest hit (a global survey of nearly 600 SMEs found that between April and June 2020, 84 per cent of WSME respondents have seen a serious drop in their sales due to the pandemic). In light of this, CNote’s efforts are needed more than ever and contribute to advancing gender equality in the workplace, marketplace and community while impacting the overall sector and society. 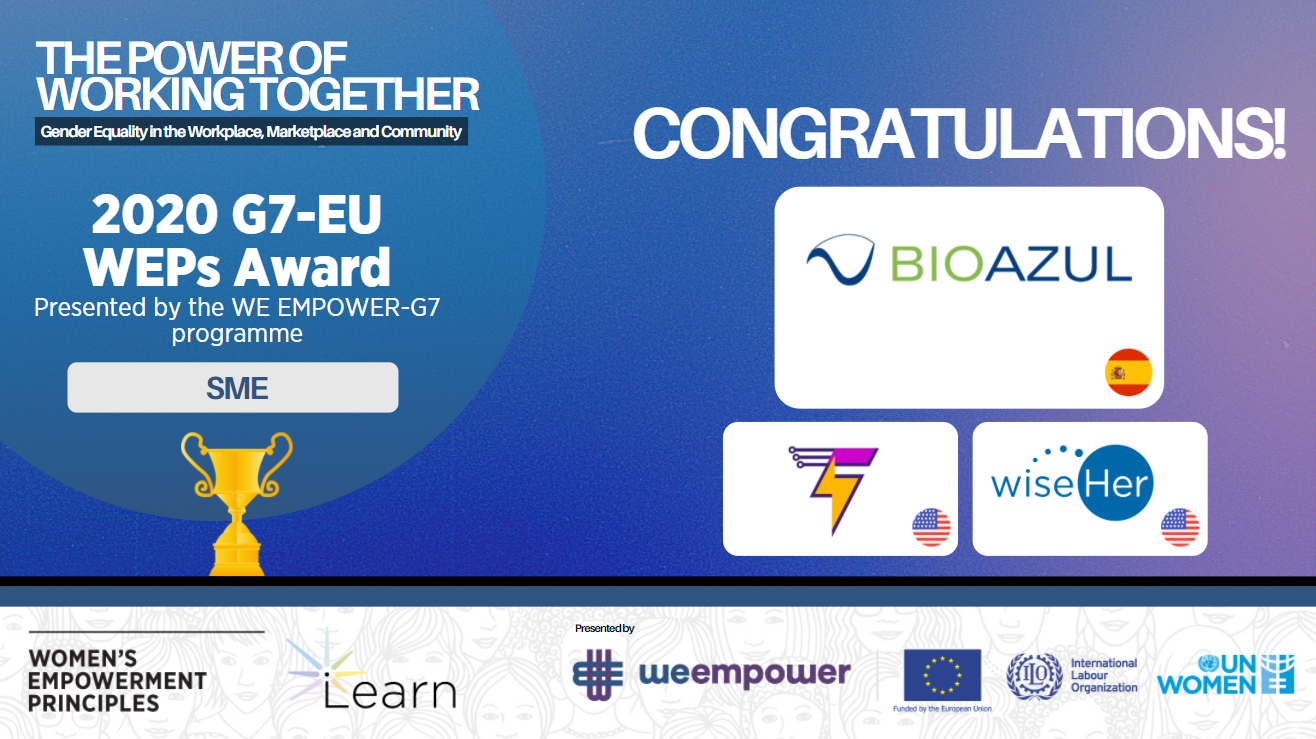 Bioazul was awarded for advancing gender equality in the workplace, marketplace and community by actively increasing the participation of women in research, development and innovation projects. These actions are aligned with the European Commission’s Gender Equality Strategy in Horizon 2020. Bioazul has shown tangible results from their actions, including by promoting women in decision-making for sustainable and inclusive growth and addressing the gender gaps in the STEM sector. 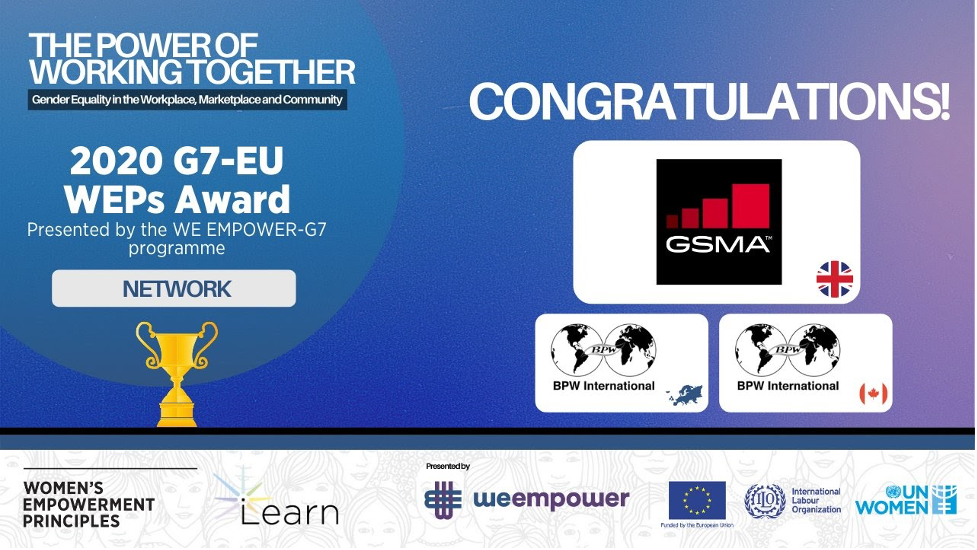 GSMA was awarded for their many progressive policies introduced to improve the recruitment, retention and advancement of women and minority groups within GSMA through an intersectional lens to their internal policies. GSMA’s work contributes to real change for women’s career development and leadership roles while actively working to reduce the gender gap in the senior roles within GSMA and in the wider tech industry. GSMA has also taken an innovative approach to gender equality by focusing on intersectionality by addressing both gender equality and issues related to ageism. GSMA’s work reaches many and has tangible, positive results for gender equality in the workplace, marketplace and community.

Find out more about our Youth Jury: 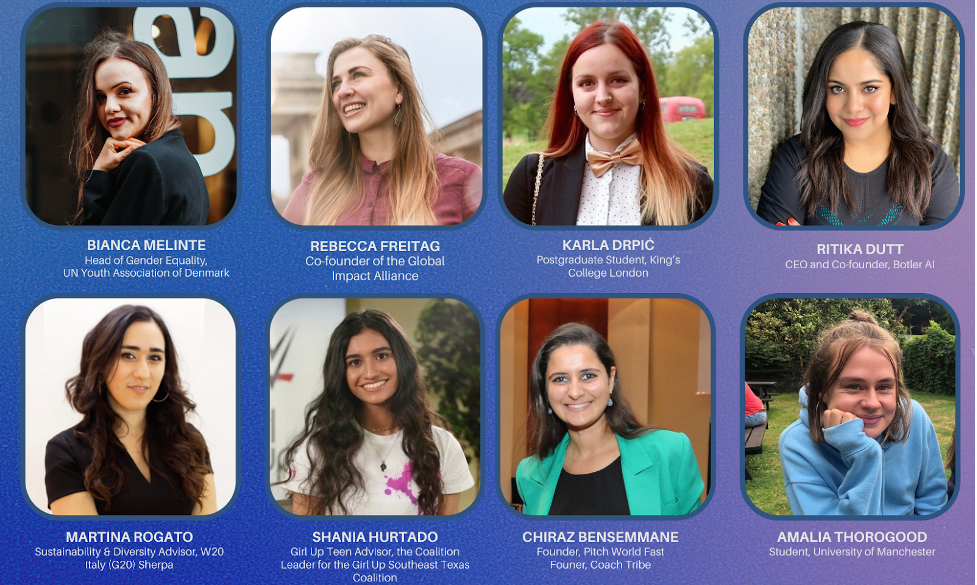 Amalia Thorogood is a 20-year old student at the University of Manchester in the UK, studying History and English. Amalia grew up in South London where at the age of 15 she joined my local Labour Party which fueled her interest in gender politics. Since then, Amalia has actively pushed the issue of gender equality in her branch, and have also participated in community initiatives such as collecting and fundraising for food banks: a cause which is important to Amalia as food poverty in the UK disproportionately impacts women, and particularly single mothers. After University Amalia hopes to continue to pioneer this cause in her working life.

Bianca Melinte is the Head of Gender Equality at the United Nations Youth Association of Denmark. For the past five years, she has been writing papers on female corporeality and identity. Her final academic thesis focused on exploring women’s sexuality and the quest for self-discovery. Bianca is an SDGs advocate who aims at promoting gender equality in the Nordic region through entrepreneurship, leadership and tech. She is also focused on empowering young women to actively engage their voices, opinions and ideas in dialogues, platforms and processes that relate to their bodies, communities, education and futures. As a UNYA Ambassador, Bianca’s dream is to provide a platform that enables women to become entrepreneurs and support them to start and scale up distribution businesses so that they are able to earn income and gain skills that help them to have a successful life.

Chiraz Bensemmane is a nomad entrepreneur and expert in sales and networking. She has been working, selling and travelling for over 10 years in more than 12 countries for over $3 million worth of products and services. She is the Founder of Pitch World Fast, since 2015, a business development consultancy & project management company providing its clients both public authorities & private companies with support especially for exports & cooperation projects in African & emerging markets. She launched the Hive Women Leadership Program Algeria in 2019 and helped 5 women launch their project. End of 2019, she started her second company, Coach Tribe, a platform for online coaching, with more than 30 coaches from 15 different countries who can coach on personal development, business, career, leadership, mindset among other things.

Karla Drpić works as Project Manager in Social Sustainability & Integrity in the U.K. In her role, she runs various initiatives relating to business and human rights, including Target Gender Equality, a gender equality accelerator programme for UK-based UN Global Compact participants, a cross-company Diversity and Inclusion Working Group, and UK Network’s involvement in Action Platforms on Decent Work and SDG 16. She holds a BA in International Relations and Modern Languages from the University of Essex and is a recent MA War Studies graduate at King’s College London. Karla is passionate about global affairs, geopolitics, and human rights, and has a particular interest in armed conflicts. She is fluent in Croatian, English, and Spanish, and has good knowledge of Italian and Portuguese.

Martina Rogato is a Human Rights Activist and Sustainability Advisor. Martina graduated in International Relations at LUISS University (Rome, Italy) and in Green Management & CSR at Bocconi University (Milan, Italy). In 2012 she started her career as CSR/Sustainability Advisor in different consultancy companies. She currently works also as a Contract Professor at Lumsa University and at Ilsole24ore Business School teaching on Sustainable Development Goals (SDGs). She is part of the Italian Delegation of Women20 (W20) since 2019 and in 2021, under the Italian G20 Presidency, she will fill a position of W20 Sherpa. In 2019, Startup Italia nominated her as one of the 1000 women changing Italy with her social commitment. In 2020, Pope Francis nominated her as one of the young change- makers contributing to create a more inclusive and sustainable economy. She delivered a Tedx Talk at TEDxCatania in 2019.

Rebecca Freitag spent her mandate as the German UN Youth Delegate on Sustainable Development representing the interests of the young generation at UN conferences on sustainable development and in national politics. Promoting the Sustainable Development Goals (SDGs), she assists young people, businesses and civil society in a transformation towards sustainability. As the Ambassador of the Rights for Future Generations, she challenges our current paradigms and explores ways into a sustainable future.

Ritika Dutt was born in India, then raised in Hong Kong and Singapore. Dutt then moved to Montréal to pursue her bachelor’s degree at McGill University, where she double-majored in Economics and Political Science with a focus on Statistics and International Trade and Relations. After having experienced workplace harassment, Ritika co-founded Botler AI in 2017. She designed and spearheaded Botler’s first technology application in Criminal Law, a free tool to help survivors of sexual harassment determine whether their legal rights had been violated. In 2019, Botler AI entered into a long-term partnership with the Department of Justice Canada and the Canadian Legal Aid System to bring Botler for Citizens to life for all 37 million Canadians. Ritika’s accomplishments and contribution to the future of Justice have been recognized globally. Ritika was named as the only Canadian on the Forbes 30 Under 30 2020 Law and Policy List. She is a frequent keynote speaker on the use of technology in the Justice System and the future of workplaces.

Shania Hurtado is a bilingual 17-year-old Venezuelan American student, writer, organizer, and coder from Houston, Texas, USA. She currently serves as a Girl Up Teen Advisor, the Coalition Leader for the Girl Up Southeast Texas Coalition, as well as a Women Deliver Young Leader. An advocate for gender equity, climate justice, and women in STEM, Shania is dedicated to organizing in her community through an intersectional feminist framework. From organizing the first Houston Youth Climate Rally, to founding and directing HoustonGirlsCode, a coding camp for young girls, to speaking at the Youth United Nations General Assembly, she strives to uplift the voices of women of color and make space for the youth.